Another Raider season started this past weekend. My daughter is cheering again. This season we get to sit and watch instead of work...hoo rah to that! We were sitting in the upper seats and my digital doesn't have a very good zoom. This is a new location this year. It is in the downtown area. The building had been abandoned and the new owner bought for something like $1,000. He had to put a lot of money into it, but the building is very cool! He is getting all different events in there now. The Raiders are using it for their "home" now. My dad told me today that over the years the building has had a lot of different uses. During the 20's it was a dance hall. The National Guard used it for a training center and it was where the men and women met to be shipped out to war. High School teams played there. The circus was even held there! Nice to see something old used again instead of being torn down. 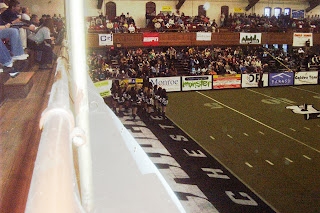 You can barely make the cheerleaders out... 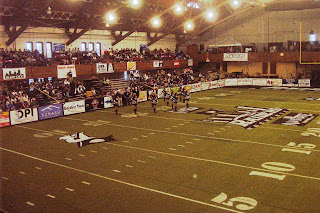 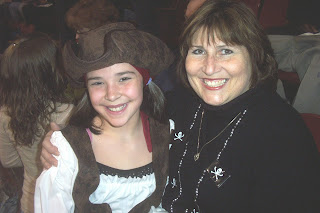 A pic of my niece and I. You know my brother-in-law owns the team and my younger niece and nephew are "pirate" mascots. Notice my "pirate" beads.

that's great that the building is being used again and adding to the history. You have got to show us the cheerleaders' outfits up close! They look pretty from far away! You and your niece have beautiful smiles!