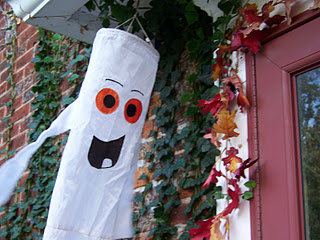 May all your ghosts be smiling ones today!!!!!
Posted by Punchbugpug at 1:00 AM 3 comments:

Huh, what did you say mom?

Posted by Punchbugpug at 9:57 PM 6 comments:

Stewie is little and doesn't have much in body fat.  He asked for his own jammies to help keep him warm!  Let's see what mama can come up with Stew! 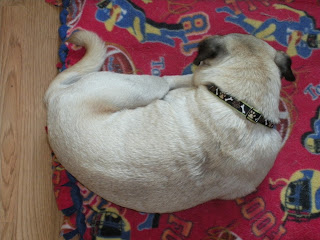 Posted by Punchbugpug at 4:28 PM 3 comments:

Yes, the jammies are open in the belly area for potty breaks for both boys and girls, without taking them off!
Posted by Punchbugpug at 8:39 PM No comments:

The "Brrr, it's getting cold outside Pajama Sale" 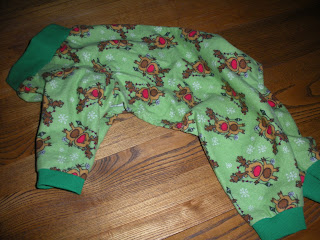 The other day we had strong winds. When I let the dogs out I glanced over by the boat and thought...where did that bush come from by the boat....opps...... 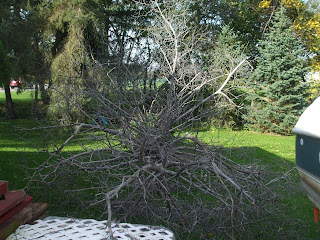 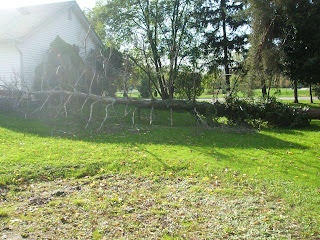 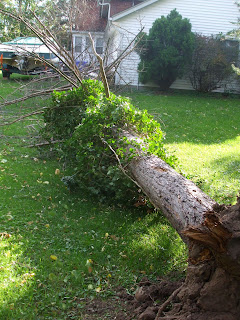 The ivy on this tree was very cool and the darn woodpeckers were enjoying it too, but we knew it was only a matter of time until it came down.  Thankfully no one was in the yard when it happened!!  Not sure I could have outrun that tree!  P had me strap on my work gloves and it only took us an hour and a half to get it all cleaned up.  Now I can add "lumberjack" to my resume.
Posted by Punchbugpug at 8:34 PM 5 comments:

It's nearly Halloween, so I'm having a Halloween Tutu Special - All Halloween Tutus are $20.00 with free shipping plus 10% of all sales are being donated to Rescue! If your interested let me know! There is also still time to custom order a Halloween Tutu! The special runs until 3 p.m. on Friday so I can ship in time!!!

After fun times at the Mast Stores and visiting Shanny's place, Girlville's husband started us a fire, while Sandy and Girlville made us Paninis for dinner!  Yum!!!! 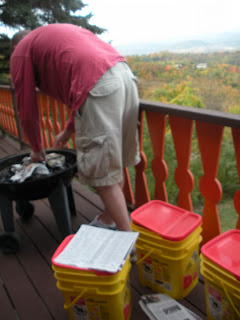 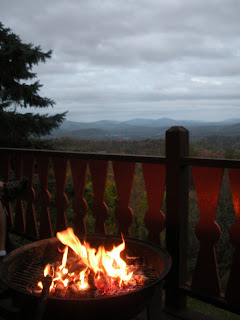 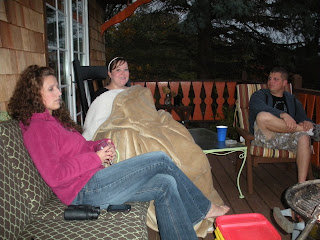 A fun evening with friends, fire, "smores" and wine!
Posted by Punchbugpug at 1:09 PM 1 comment:

Saturday morning we got up early and headed to the Farmer's Market in Boone, NC.  First stop was the Alpacas.  Neither one was very interested in making friends.  The black one was making some crazy noises. 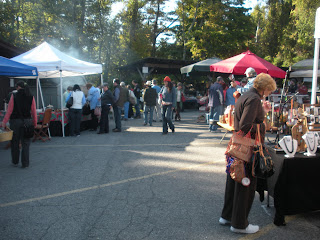 Since we were staying longer and had a long drive home, we decided fresh fruit and veggies weren't a good idea for us.  We did enjoy hot cups of coffee and C got a muffin.  We didn't stay long as we were heading back to the house to get ready to get ready to walk around Blowing Rock. 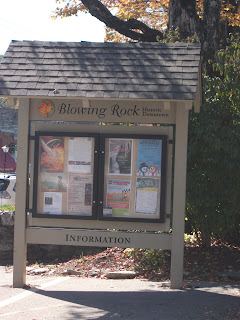 It turned out to be a great day!  The town was quaint and had lots of places to stop between shopping.  Some of us went and got Gelatos (my first one!) and a few got lunch.  There was a lot to look at (and buy), but C reined me in since the trunk of the car was SO SMALL! 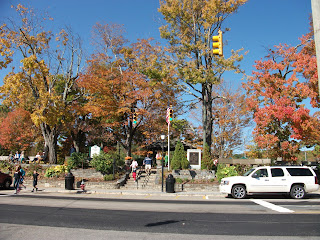 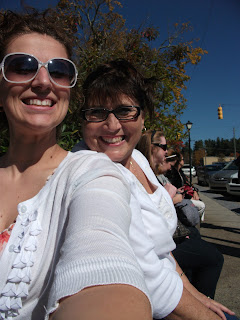 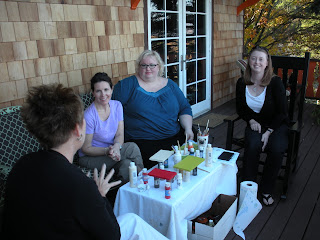 When we got back to the house we decided to work on the art project I brought.  Girlville and I thought painted plaques would be something simple we could work on and still get plenty of talking in! 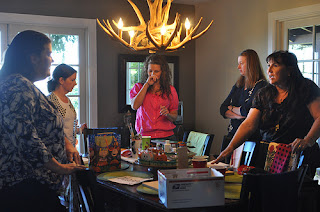 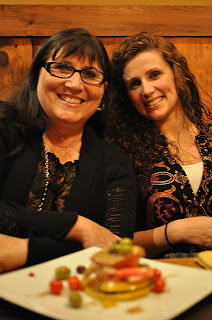 We had dinner reservations for 6:30, so we crafted until around 5 and then freshened up to head out to dinner at Bistro Roca
Posted by Punchbugpug at 11:13 AM 3 comments:

So we've officially been home for more than 24 hours now.  Strange how quickly things fall back into "normal".  We had a WONDERFUL trip.  Those of you that have followed along with me may know that I have been on several Bloggy Meetup Trips.  This year's trip was to Blowing Rock, NC


C and I started out at 3:30 a.m.  We were nearly through Pennsylvania when daylight took over.  The scenery was awesome.  We took so many photos of the drive itself!﻿
﻿
﻿ We had decided to rent a car and were supposed to get a Ford Escort.  When C picked it up, there were no cars available, so we got a 2012 Mustang Convertible!  We agreed that once the temperature reached at least 60 we would put the top down.  We saw a nice exit for New River Gorge, so we pulled off for a "pit" stop.  We couldn'nt have picked a more beautiful spot!  There was a center, exhibits and many walking paths.  If there had been more time we definetely would have visited longer. 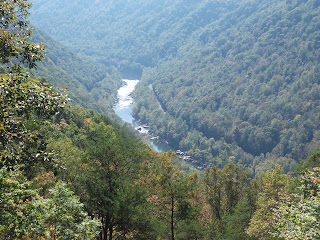 ﻿﻿So we put the top down and headed out again!

﻿﻿
We drove and drove and drove.  We made it all the way through West Virginia in what seemed like 15 days.  Our trip-tik had us going through a bit of Virginia and then into North Carolina....but....Mrs. Garmin had other ideas for us and we took the "backway" in and ended up going through Tennesee.  It's always better to think you may be lost with someone else in the car!  The road was two lanes and VERY CURVY and in the woods with a creek along side of us and NO guardrails.  I am beginning to think other states don't believe in guardrails!  At one point we came upon a man trying to catch his horse that was walking down the street!  I so wanted to take a photo, but honestly I'm not sure who looked more surprised me or the horse.

Hours later when we finally arrived at the mountain area we got a tad lost and had to call Girlville to guide us into the right part of the mountain to find the house!  It was BEAUTIFUL!!!!!  We were the second car to arrive and it was so fun to be greeted and helped into the house.  We had wine and cheese while we waited for the others to arrive.  Once everyone had arrived we sat down to some of Girlville's awesome Chili!  Then we did what we all do best...TALK and TALK and TALK!

Thursday C came over with her suitcase.  She stayed overnight and in the middle of the night left! ........... 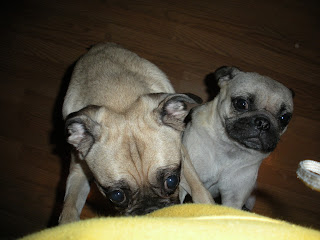 The fabulous scenery on the way South! 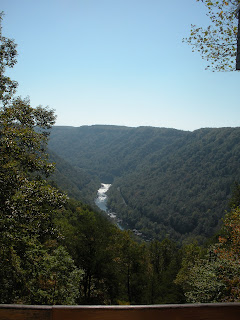 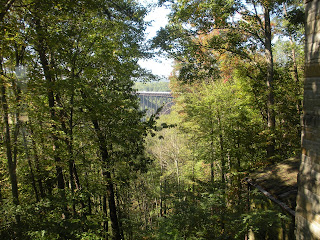 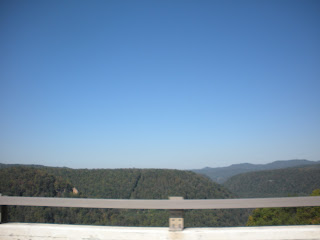 P is home Puggy-sitting, while we have an amazing adventure!
Posted by Punchbugpug at 4:27 PM 3 comments:

Look into my eyes....you are getting very sleepy.... 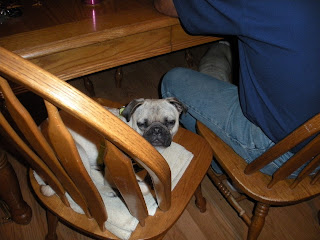 Oh, excuse me Stewie...is that your head? 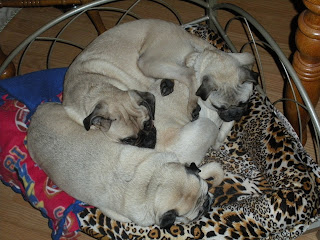 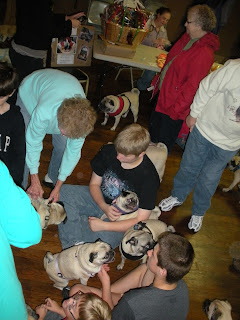 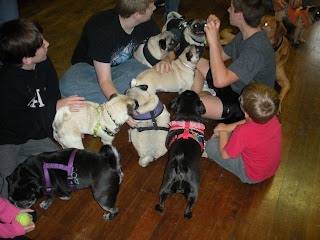