In 1996 we decided to take the "plunge" and get a pool. We had a lot of fun times, but between camp and boating, last year decided not to open the pool. 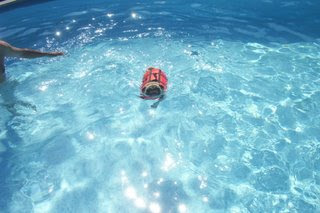 It seemed P and the Pugs were the only ones who had time to swim. The pool became more work than fun. Also, when the pool was installed we had issues with the side walls bowing out. It is an oval pool and we were told that it was a problem consistent with oval pools. Bull. The first two years we owned it, the installers put it up and took it down TWICE. This year we decided enough was enough. Take the pool down!

Day One consisted of draining the cover and then the pool itself....slightly stinky! 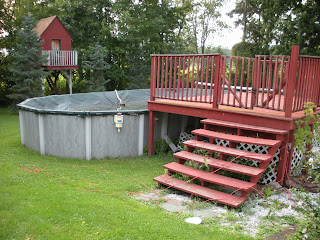 You can see in this pic how the wall was actually bowing out. It was same on other side and was actually pushing the deck. 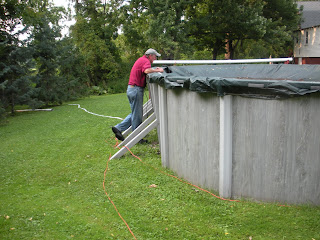 Day 3 - Crazy how fast it came down! It was sort of sad for me...even sadder to have to help dismantle! The only creatures I saw were a frog and two toads. I really expected maybe a snake? or something else slimy? The parts will be taken to the scrapyard and made into cash! 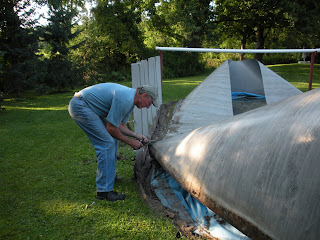 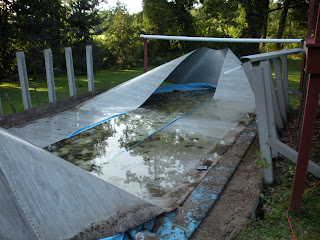 PS I'm thinking we should just light the deck on fire?
Posted by Punchbugpug at 7:47 AM

Oh no... goodbye pool! OMG I am glad you didn't see a snake.
I love that swimming puggie picture! Who is that, Rosie?

That is kind of sad - like an era of life moving on - atleast you got many good years out of it and it was above ground - not so easy to get rid of an inground pool!
You can alwasy get the pugs a baby pool :)

how fun that you enjoyed it so much over the years and now want a change.

Sad to see the pool go, but a bonfire from the deck could be good. You could roast hot dogs and marshmellows to share with a certain group of curly-tailed models!! After all, they have to maintain their fluffiness!!

i bet you are some kind of glad to see that gone! burn the deck and then put in a nice patio with a pergola over it covered in vines...add a fire pit and voila - bliss! OR build a detached screened in porch, you know, to keep the bugs out, lol.

My parents installed a round above-ground pool and dismantled it a few years ago because it became more work than pleasure. My oldest brother took it and installed it at his home (he has 6 children) and they now enjoy it with all of their friends. Luckily my parents were able to pass the pool along. The deck: my dad adjusted it so it fits to the side of the house and sliding door.

OH, that is sad...but all that maintenance will be out of your hands and mind. I wish you could turn all scraps into cash! It looks so pretty up your way. We are in the dog days now! I like Girlville's idea of patio/fire pit!

wish we lived closer! Id buy your deck for our pool! we had a contractor come by earlier this summer and he quoted us almost 5 grand!!! for a pool deck! do you think UPS will pack your deck up and deliver it to us? LOL!

Oh no!
But if it takes away a lot of work for mostly nothing, then yay!