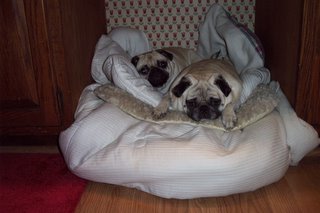 This is the space in between my cupboards where my dishwasher was. Back before we got Chloe, I had my husband remove the dishwasher. I was constantly redoing the dishes and decided that I really didn't mind washing dishes by hand. Once removed I told him that was where the crate was going to be for my first Pug. After my begging of 6 months that came true. Since neither of the girls slept or stayed in the crate during the day, we took the crate out last summer and replaced with their bedding. Right now my daughter's old comforter is in there with their bed on top that they got for Christmas. Now usually the cat is in there, but today this is where my daughter found them! Their own little Pug cave! Hope they don't get upset when the crate goes back in there for the new puppy!

Speaking of that puppy - no eyes open yet! Darn!

MISSING NEW YORK PUG UPDATE! - Pug has been returned to his owners, thinner, but fine!!!!
Posted by Punchbugpug at 11:26 PM

Thats a great idea! Im not giving up my dishwasher though! They look very happy to have a big bed in the middle of all the action.

I love seeing puggies cuddled together!

Feel free to print off our letter and forward it to friends.

So cuuuute! Laughing at the comforter thing. Isn't it like a pug (or in your case two pugs) to find the softest spot in the house for a napping place?

That is great news about the pug going back to his people.
I like the little hiding place they have there. They look so cute snuggled up in it.