These long weekends are easy to get used to 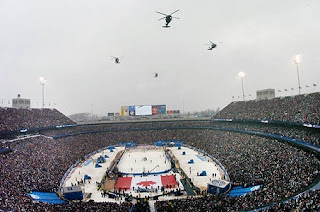 Yesterday we went to my dad's and watched the "ice bowl" hockey game. P and I both love hockey. Our son played from the time he was 3. C learned to toddle around at the games. This game was amazing as it was played on a football field. I'm sure no hockey team has EVER played with 71,000 fans present. I tried to get P tickets, but they were sold out almost immediately. I think it was much nicer to sit with a glass of wine by the fire watching the game! After the game we had homemade chili and homemade chicken soup. A is so good to us and my dad. We are truly blessed she came into all our lives.

We got home around 6:30pm. All the forecasts were calling for some really bad morning driving, so we were in bed by 7:30pm. I fell asleep immediately, as did the four furry ones. I guess P did too as I heard no sounds from him. Then I woke up...I thought it must be 1 or 2 in the morning. P was also awake and turned on the tv when he heard me awake....it was only 10:30pm!!! I thought I'd never get back to sleep. The Pugs were sprawled, I think I was barely hanging on to the edge of the bed!

Then today...back to work...ugh. I am starting out the New Year busy at work. It's going to be a long haul until the next day off on January 21st!

In computer news we still do not have our hard drive back. It has only been since Sunday, but it feels much, much longer! I think C is getting tired of us using her Christmas gift! I'm tired of not transferring photos from my camera.
Posted by Punchbugpug at 3:40 PM

My dad was watching that game, too. He couldn't believe it. He kept calling mom over to see the snow falling as they played. Mom and dad stopped watching hockey when Ray Bourque went to Colorado, but they watched him win the Stanley Cup.
mom agrees with you about watching while nice and warm at home. That's what mom was doing, as it was snowing here too.

We watched the game on TV!! It was great to see them outside, playing old time hockey :)

The Ice Bowl?? I never heard of it. Pensacola has a hockey team...the Ice Pilots. I've been to one game. I just would rather watch on TV. I hope you get your computer back soon so we can see what you're doing! Hi Ho Hi Ho!

watching that hockey game WAS neat! i loved that it was snowing on the game. that's just too funny about you waking up and it was only 10:30pm...we went to bed early too - trying to prepare for the inevitable today...hurry up january 21st...

Isn't hockey great! Mommy and Daddy sure love it. They used to go to Nashville Predators games when they lived in Tennessee. They haven't gone to any since we moved to Utah ... now they're too busy skiing!

What is ice bowl ? Is it fun to play ? Happy New Year Everybody - Licks from Mimi the Pug

Funny how crippled we are without our computers.

How did we ever live without them?

Fun game! Hope you have a great new year!