*Edit - the person owning the dogs apparently had "issues". He felt he was helping get animals out of bad situations. He stopped his medications and stopped functioning. None of the animals had food or water and there was no heat on in the house. It is very hard with these situations as sometimes people who think they are solving the "problem" end up having hoarding animals and then can't take care of them.

My bf L got news of a problem in her town.

A number of officials assisted in the removal of living and dead dogs found inside a residence Tuesday, on a frigid evening where the temperatures inside the unheated house weren’t much higher than they were outside.A a neighbor who had looked after JB since he moved to ***** last July, said she had reported her concerns to the Sheriff’s Department earlier in the day.Y was in tears as she provided a list of the names of living and dead dogs removed. After two County sheriff’s deputies, sheriff’s investigator, and district attorney’s office investigator went through the house, more than a half dozen live dogs in poor condition, a live pigeon, three dead adult dogs and 12 dead puppies were removed.

She went to see them Saturday and I drove down there with her yesterday and spent several hours holding them. Wow......

Has anyone ever seen a brindle Pug?????? The 2 brindle females are pregnant. Both are extremely shy and spent almost the entire time hiding in the corner cage. 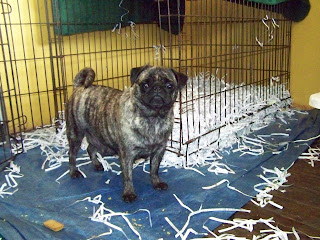 This little apricot female is skin and bones under the sweater. She wants to be held all the time. What a doll. The little male has eye ulcers so bad it seems he is already blind. 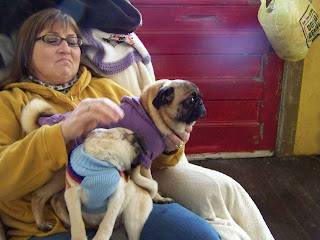 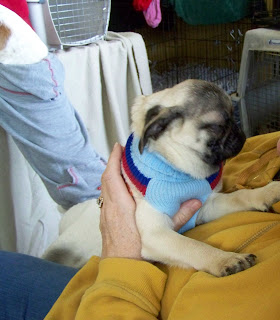 The two brindles are very bonded. I can't even imagine what their babies will look like? It appears the father must be this other young male. Not sure but I believe only male in the group, but then I don't know which were found dead. 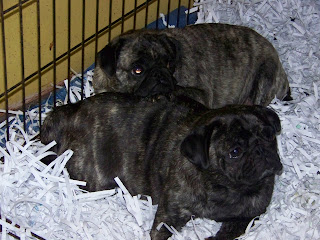 The only male. Skin and bones. He'll be a handsome guy with some weight and love! 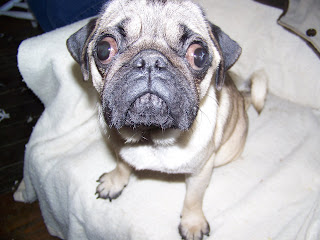 The little scared apricot. She had apparently had puppies, none of which survived. What a love. 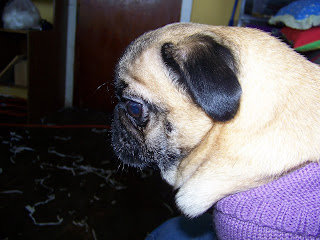 When we got ready to go they all went in the corner cage together to make a pile of Pugs...even mistreated Pugs get along! 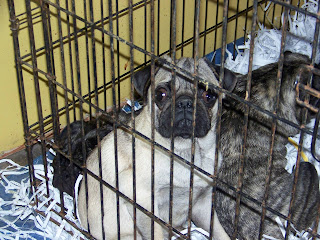 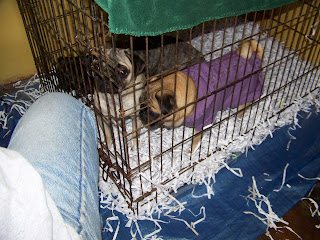 Posted by Punchbugpug at 6:42 AM

Oh punchy...this is just heartbreaking. I'm glad they were able to be saved and hopefully those angels will find a good home. Was that a puppy-mill-type situation? Was the person that owned them dead? What's the story behind that?

Awe, poor little babies! How can anyone be so stupid or just plain cruel??

My heart is breaking. I would take those brindle pugs if I could! I hate that I live so very far away. My husband keeps telling me that I shouldn't read about these kinds of things, as they only upset me...BUT...if we stick our heads in the sand, situations like this will only get worse.

Oh, they are all so sweet looking I want to take them all home with me! I hope this person, if still alive, is prosecuted for his actions! I just have no pity for someone who can do that to animals.

Oh the poor things, stories like this just break my heart.

I think I have seen a brindle pug before in a pet store, it was just as sad as those two cute little girls.

Oh, my heart breaks for the dogs that didn't make it, but I'm so happy that some were saved and will hopefully go on to REAL, caring forever homes. What an ordeal....I would take them all if I could....especially that handsome brindle couple!

Those poor babies. I am glad you were there to hold them and give them some hope for a better future.

I thought I would cry when I saw that 12 puppies and 3 adults had died. How terrible. I can only pray that they all get loving homes where they can hopefully recover.

PS send me your email address and I will invite you to be an author on DWD. :)

Oh that is so sad! I just hate hearing about these kind of things, but I'm glad that some were saved. It's so nice to know that there are people who care and are involved in the rescue groups. Eli has only been with us since August, but I can't imagine life without him now or what his life would have been like if he hadn't been rescued.

By the way, I have seen a brindle pug like the one in your first picture. It was at KPR's Pugtoberfest. He was a big guy too!

OH My Gosh....how heart breaking...so glad to hear you helped steo in to help get these cuties forever homes!
I have sen Brindles...they are adorable! Hard to find though!
Keep us posted on these sweet Pugs!

Oh my, this is so heartbreaking. I hope those precious babies get wonderful homes.

oh my, what a terrible situation! i have them in my prayers to find a happy loving home as soon as possible.
hugs,
puglette
:o)

they ALL look so cute and sweet! i think hoarding is like a disease - people think they are helping the animals, but really they aren't. it's so so sad. i'm sure these puggies will get great forever homes.

oh the poor babies. It just breaks my heart to hear about cases of hoarding. Deep down those people feel like they are doing good when unfortunately they are doing more harm.
What sweet babies!

That is just heartbreaking . . . who could do that to any animal, much less pugs?! You are such a saint for doing what you do!

That is horribly sad.

Those brindles are BEAUTIFUL! I hope you can share puppy pictures when they have their puppies.

Poor pugs! They are so adorable... I wish them all the best! It´s too bad we are so far away to help... Pugs are quite rare in Portugal so there are no pugs in shelters or to be rescued.

Ugh!! I hadn't heard this one before or we would have been there to rescue the survivors...truly horrifying indeed.

Thanks for posting our Curly Tail chip in widget!

As a mum of a baby puglet I aquired at 5mths old my heart goes out to these babies. Sadly my little Ella was born with Demodex (I didnt know anything of this at the time of purchase) this has now resulted in her losing both eyes...the operation is being performed as we speak. I'm devastated for my baby but she will have the very best love and attension for the rest of her life. I would still have bought her even if I'd known how things would turn out, as I would be petrified that someone else wouldnt have cared for her as we have.
Thank god there are caring people out there that rescue and care for this breed. You are my heroes!!
Kind regards
Jay Puglet