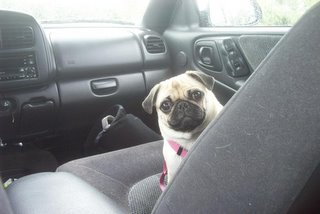 Photo taken in Cape May, NJ
Mama was in the basket shop and Zoey was waiting for her to come out when this was taken

Zoey is the smallest of our three girls, but definetely the Alpha of the bunch. She is feisty, funny, and sometimes moody. She came from Pennsylvania. The hubby and I drove to get her on Mother's Day and from that point on I became her mother. Her Pug mama died from a fall when she was only 2 weeks old. From that point on her mama was the family Bulldog. Her breeder cried when we left.
Posted by Punchbugpug at 10:25 AM

What a sweet face! And a perfect Mother's day present :)

What a beautiful face Zoey has. How lucky you have each other. How many litter mates did she have to be with when her birth Mom passed away?

She does have a cute face, doesn't she! Thanks! She was one of four puppies. She was sooooo tiny when we brought her home. I'll have to post photos of her and her surrogate mom and siblings.

Really Rosie is bigger than Zoey now? No Kidding! How much does Rosie weigh now? I am always curious of her weight seeing how her and Belle are the same age. we saw a pug the same age as Belle at the Lake and she was bigger than Belle.
Belle's Momma lost all her Puppies except Belle due to a emergency surgery during her pregnancy. she only carried Belle to term. The Vet believe her tininess may have to do with a bad pregnancy. She is a Spit fire though..she is FULL of it!
What a sad story about Zoeys Momma....How did she fall? out a window or something?? :o(

She is a cutie pie and I agree with Mypugsblog...a wonderful mother's day gift. I hate to hear that her mama passed so soon after she was born. My husband picked up Chichi as a surprise for me and loves to tell me the story of Chichi saying goodbye to her mama at the breeder's house. Makes me want to cry every time I hear it.

She was a wonderful Mother's Day gift! I had arranged to pick her up during the week...leaving work early, long drive, nighttime. Then I checked my emails and the breeder said "you can come today if you want". I figured my mom had something to do with this in heaven. Mother's Day is tough for me having her gone. Anyhow, we took Chloe, jumped in the car and off we went! It was a longgggggg drive, way up in the hills of PA. All I can say is that it was a good thing we hadn't had to go there at night, I'd still be looking for her house! We actually ALMOST bought 2 Pugs that day. We were holding the little boy and Zoey and the hubby asked if I wanted 2. My good sense prevailed, plus I didn't have that kind of money with me! HAHA